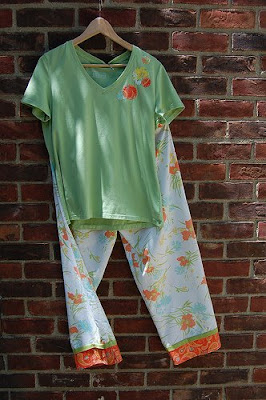 Orange. I don't think I have ever bought orange fabric in my life! (Actually, I don't think I have ever bought anything orange in my life, except maybe carrots and oranges!) But a while back I found an old vintage sheet with big orange flowers - not particularly the color I that attracts me. But it had a funky kind of vibe and I thought it would make some fun pajama pants. 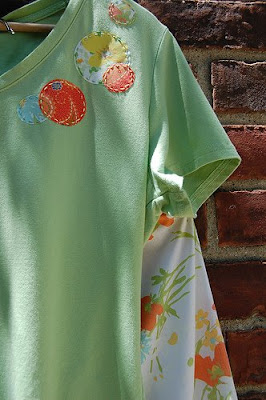 I used an old pattern book that I had called Pants and Capris by Cindy Taylor Oates. I don't think it is still in print, but she has another book called Easy Sew Pajama pants which looks very similar to the pattern I used.

I bought a small strip of Paisley Party fabric from Guildcrafters in Berkley to add to the bottom of the pjs. My very first orange fabric ever! I added a little strip of green from another old sheet to pull out the green color. I was delighted with the combination. The pants are funky and comfortable and the sheet fabric is so soft! 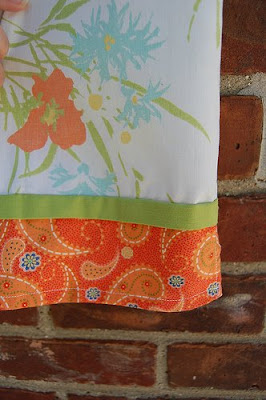 For the top, I bought a t-shirt from Target. I used Wonder Under to fuse the little circles on the corner edge and outlined the borders by hand with some pearl cotton thread. (And yes, I had no orange thread in my stash, either!) I totally adore these! I want to make another pair, this time with shorts! 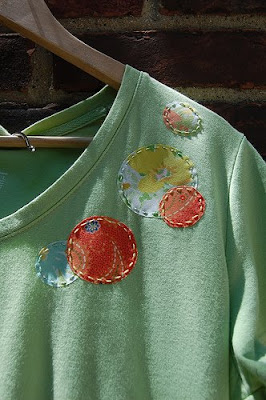 These are great! I especially love the embroidery on the t-shirt. It's exactly what I need to do to some of my shirts that have stains on them.

hey, that's a great idea to use this to cover up stains! Thanks for the inspiration!

cute pajamas! The orange adds the perfect punch to this ensemble

Truly Lovely! Oooh I can imagine how nice they feel! Better than silk!

This is a Flickr badge showing public photos from karly b. Make your own badge here.